Lindemans’ Wind of Chance: Everybody Won!

Lindemans and Emakina have been working together for a little while now, and it was only a matter of time before a campaign like this one came to life! The Wind of Chance campaign not only probably boosted 80s German band and possible soundtrack to your conception Scorpions’ Spotify ranking, but it also generated massive interest on Social Media and made lots of Lindemans amateurs very happy.

The concept was simple and efficient: you’re thirsty, looking for a sweet tasty lambic beer, so you do do the only sensible thing. Which is dropping everything you were doing, going to the nearest supermarket and buy a bunch of that sweet Pajottenland juice that the world envies us. If you happened to purchase your Lindemans beer in one of the countless participant retailers, you received a scratch card with your bottled delight and could win fantastic prizes.

Most fabulous of all said prizes, was the e-motorbike we all secretly dream of leaving everything behind with, hit the road, never look back and find a country that allows human-motorcycles civil unions.

The campaign was a huge success, both in POS and on Social Media, and the Lindemans fans loved having yet another reason to justify buying Lindemans beer, which they only drink in reasonable amounts but love to stock in their cellars ‘just in case’. But check out our Lindemans case and you’ll get a better hang of it very quickly. Maybe grab a Faro from your fridge first. Just in case. 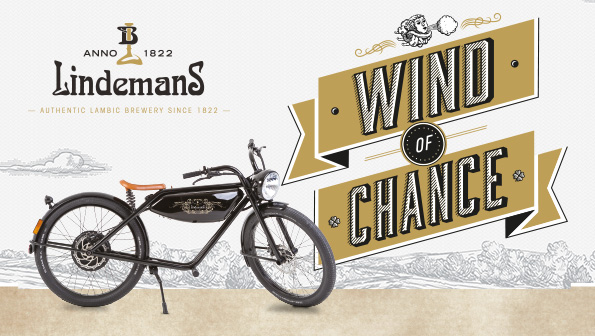